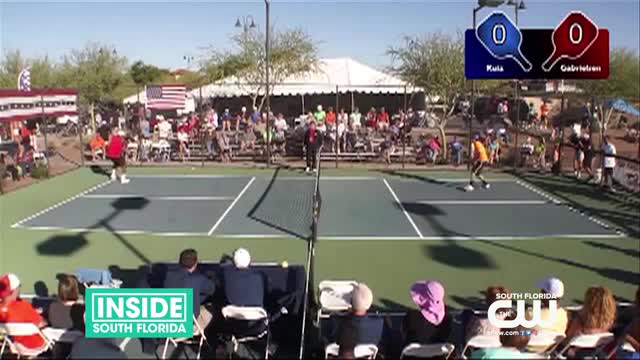 It’s the latest sports craze in South Florida: Pickleball. Perhaps you play it, but if you don’t know too much about it, here’s the 101.

Pickleball is played on a badminton-sized court and can be played as singles or doubles. The court is the same for both. Games are played up to 11 and you have to win by two points.

On both sides of the court, nearest the net, there’s a no-volley zone called the kitchen. Beyond the kitchen are the right and left service areas. To serve, you stand behind the baseline and hit the ball underhand into the diagonal service area, like tennis. But, unlike tennis, you only get one fault. After the serve there’s a double bounce rule, which means both teams have to let the ball bounce once before they hit it. After that, you can hit it out of the air. But you have to stay out the kitchen, unless the ball bounces in there first. Those are the basics. To learn more, get out there and play.