Supergirl: Brainy Sanders, Streaky the Supercat, and get ready for Ursa! (S03:E09) 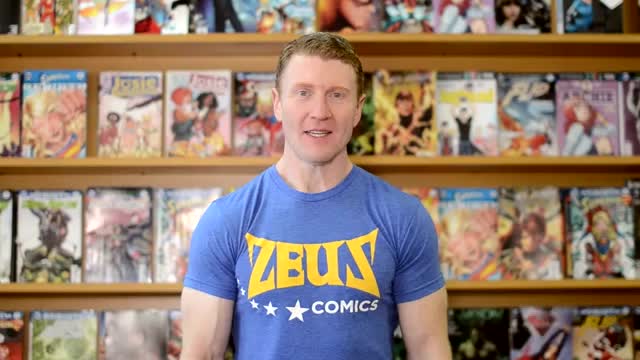 Hello my Supergirl Super-Friends! it's Richard from Zeus Comics!

Oh how very deceptive Supergirl writers - leaving us in a cliffhanger where Samantha Arias was about to go all Reign on her daughter Ruby - but it’s really a mother/daughter Nerf fight! Lol

But that doesn't mean we're done with Reign - as she Dr Jekyl/Mr Hydes it to drop a criminal and a message to the Catco offices "There will be no mercy only justice!

With Supergirl in coma, Mon El wakes 12th level intellect Querl Dox aka Brainiac 5 aka Brainy or as I like to call with that pale blue face and shock white hair Brainy Sanders seriously separated at birth. So Brainy Sanders has a  device he developed to interact with coma Kara. Cool aside... the Legion had three founding members: Saturn Girl, Cosmic Boy and Lightning Lad  - and despite five pods it was neat to see the show embrace the power of three - even if it's two different founding characters...

Speaking from different characters they do make a reference to Lightning Lad kinda. It wasn't him, but It was his sister Lighting Lass Ayla Ranzz. It occurred when Mon El was describing their classic comic villain the Blight whom Mon El said had devastated Ayla's home planet Winath. It's also Lightning Lad's home planet? Does he exist in the Supergirl TV Universe?

Perhaps the coolest comic reference came in the coma-scape when we got Streaky the Super Cat! Well maybe just plain Earth cat in this case. Kara explains he was a stray she befriended as a child drawing support from their both being orphans. Streaky helped her to learn to be gentle with her super strength. In the comics just as Superboy had Krypo the super dog. Supergirl had Streaky the Super cat.... Though not an actual Kryptonian cat - so my hopes are high that we could get a real super-powered Streaky in the show!

With Reign now going directly after the criminals in prison, the Legion finally reacts and engages Reign in a superpowered melee! Once Supergirl realizes she needs her Kara persona to get out of coma-scape (seriously are we going to do this Kara/Supergirl identity dance forever?), she joins the fray and saves the Legion using the Kryponite “Sundown protocol” syringe to dispatch Reign.

So how will Reign take on Supergirl and an entire Legion? Her new minion Thomas Coville won’t be enough so Evil-holo-mom mentions others..... And I've said this before - there were five (FIVE!) worldkillers in the comics...

So *clap* Let's *clap* talk *clap* about *clap* next *clap* episode! It's called Fort Rozz but I'm going to go ahead and dub it Spice Girl Power. Did you catch the preview? Supergirl, Saturn Girl plus Livewire aaaaand is that Psy the telepath from the Triggers episode? And If that's not enough Spice Girl Power classic Superman actress Sarah Douglas the original Krypotonian villanous bad-ass Ursa from the phantom zone makes her Supergirl TV Universe debut! Preacher Thomas Coville did mention a Kryptonian Priestess from Fort Rozz that gave him information on the book of Rao... But hey didn't Supergirl launch the Kryptonian prison Fort Rozz - the one Astra and Non and Indigo came from up into space at the end of season one?

Lots of developments ahead as Sarah Douglas guest-stars alongside returning characters Livewire and Psi. So Tell me what you want what you really, really want... It's got to be the newest Girl Power Supergirl "Fort Rozz!"