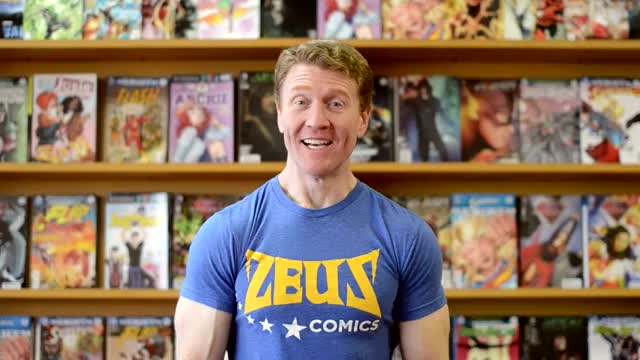 Hello Riverdale Class of 2018. It's Richard from Zeus Comics!

Betty hides a dead body, Jughead is complicit, Archie takes a bribe, a mob boss is revealed, the Mayors affair exposed, Hal loves a hooker and Chic just smiles, smirks, cries and grimaces in every scene -  Why it must be a new Riverdale!

Okay okay okay! The writers/editors for the Tell Tale Heart wanted to give us whiplash as every character scene or shout out lasted a minute before bouncing to the next. It was Alice, Betty, Archie, Hal, Hiram, Jughead, Cheryl, back to Betty. But so much happened! Here’s what do you need to know....

So Chic killed his drug dealer during a delivery to the Coopers house. Oops.

We didn't see the kill just the blood and the body and the aftermath as Alice and Betty work to conceal the crime taking the body to one of Alice's childhood secret hiding places an old abandoned sewer pipe. Remember, hers was the era before bounce houses

Betty, concerned about what they’d gotten into...you know murder accomplices...uses the recent calls/texts on the dealers phone to ascertain he was a dealer, Chic's dealer and confronts Chic about it.

Frustrated that this doesn't affect Chic or Alice even who's happy to have some semblance of family with Polly and her twins off at the cult and Hal sleeping it up at Penelope Blossom's, Betty turns to Jughead.

Jughead helps her by disposing of the dealer’s car in the Sweetwater River then calls in his Dad FP to formally dispose of the body using Sodium Chloride - FP's rationale?

He doesn't want Jughead, Alice and Betty to make the same mistake his did in disposing of Jason Blossom's body by just tossing it in the river, you know like they just did with the dealers car and phone.

Speaking of FP, the serpent’s confrontation with the Lodges almost resolves itself when Veronica brokers a meeting between Hiram and FP. Hiram agrees to pay all the back rent on the Sunnyside trailer park ending its foreclosure in exchange for peace aaaaaand for Jughead to back off on the expose he was writing on the Lodges development deals from formerly city properties Southside High and the Drive-In.

Personally, I thought that was a fair ask - but Jughead says Too Far and FP backs him up and I was like your sacrificing the homes of everyone in the trailer park for your 17 year-old sons journalist endeavors?

But how did Hiram know about the article?

See Jughead had tipped his hand on the article after he'd gone to the Mayor's office revealing to her he thought she'd taken Lodge money as bribes for city land. I'm not sure what he wanted to get out of that meeting, but it backfired - like every other Jughead plan ever this season. For real.

With the Lodges and Mayor McCoy now at odds over the potential bribery revelations, the Lodges realize their play is to discredit Mayor McCoy with her motel lover Sheriff Keller, so Veronica goes to Mayor McCoy armed with that info and a warning to resign and not take on the Lodges.

When asked by Hiram about Mayor McCoy's resignation, Veronica lies that she told the mayor.

Speaking of lying liars and the liars who raised them, Hermione is very much involved in the family business. And just as I suspect that FBI Agent Adams - not an FBI Agent. Like that fat stack of cash he tried to give Archie earlier this episode didn't tip you off.

When Agent Adams demands Archie plant a bug in Hiram's office, Archie breaks the bug and finally tells Hiram about the Agent.

But ooooooh I was getting nervous when the Lodge's driver Andre picks up Archie and takes him out to the woods. Where. Hermione. Reveals. It. Was. All. A. Test. Aha!

She then welcomes Archie to the family? Ruh-Roh

Oh yeah and Hal Cooper's been sleeping with Cheryl’s mom Penelope Blossom who tells Cheryl their romance is real. Cheryl of course tells Betty. And Betty uses that info to get Hal out of the house during a shout down Hal over Chic.

Anyone else draw the family tree of Grandpappy Blossom and Grandpappy Cooper who was really a Blossom and Hal's daughter Polly having twins with Penelope's son Jason and now Hal and Penelope dating? No?

Up next more kink on display as Midge and Moose tease Kevin and Archie, Veronica, Jughead and Betty turn a cabin get away into what looks like a swinging sex romp.

Plus will Sierra McCoy and Sheriff Keller's romance still come to light? It's a brand new Riverdale "the Hills Have Eyes"