Riverdale: Who let’s their kids go off into the woods!? And Josie exposes the affair! (S02:E14) 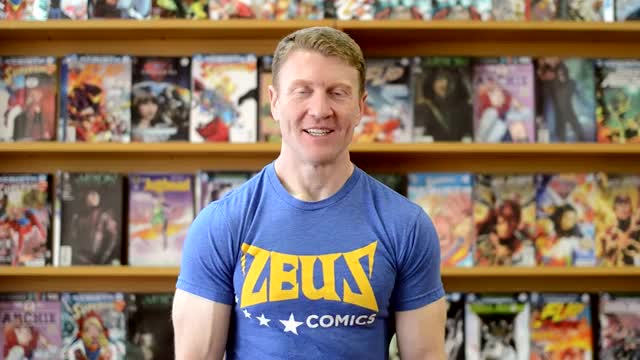 Hello, Riverdale Class of 2018! It's Richard from Zeus Comics!

Hey! Dad of the year Hiram Lodge just sent away his underage daughter, Veronica, her teenage boyfriend, Archie, and their two newly-sexed friends, Betty and Jughead, to a private cabin for a weekend of wild abandon -- including hot tubbing and jalapeno margaritas! Why, it must be a new Riverdale!

With his crime family coming into town, Hiram wants Veronica out of the picture, in case things go awry, so he offers up their safe house --  aka the Lodge Lodge -- to Veronica and crew for the weekend. And I'm, like, 'Where are their parents? FP? Alice? Fred? Who lets their teenagers take off for an unchaperoned weekend?' I couldn't lock the door to my room for more than 20 minutes without my mom banging on it.

Oh, and Cheryl totally calls to tell Jughead that Betty and Archie kissed in front of her house -- because she totally would - and it creates drama! So Veronica suggests she and Jughead make out to remedy things -- because that makes any sort of sense -- leading Betty to seduce Jughead in her Black Betty wig and thirst trap Archie to do push-ups before bed.

Speaking of Cheryl, we learn her trauma this episode. Mama Penelope caught Cheryl in bed several years earlier with Cheryl's best girlfriend at the time, Heather. Penelope called her a deviant and forbade her from seeing Heather again. Remember when Cheryl was creeping on Josie a couple of episodes ago? It all makes sense now! Of course, it's bisexual Toni that gets this confession from Cheryl, so you know they're dating now.

The OG gay Kevin Keller gets some attention this episode as Josie exposes her mom's affair with his dad, Sheriff Keller, whose actual name I rarely remember because even Sierra McCoy calls him Sheriff Keller. It's Tom, btw. Sheriff Tom Keller.

After a little tension, Josie apologizes at the premier of the new gay coming out film Love, Simon. If you wonder why this entire episode was an ad for Love, Simon, it’s because its directed by Riverdale producer Greg Berlanti. Did you miss all that promotion? Because, I mean, they said the title Love, Simon like 80 times and they even showed a clip when Cheryl and Toni and Josie and Kevin were at the theater. Look, I've heard great things about this film, but are they trying to get me NOT to see this movie?

Oh, and Moose has never told his girlfriend Midge that he and Kevin had sexual relations. It's sooo mixed signals to give some type of coming out to Cheryl and then enforce Moose being in the closet. Seriously, I'm gay, you're gay, they're all gay. Betty even mentions the kiss with Veronica from cheerleading tryouts.

Also, probable gay Chic is also still around creeping out Betty, using her shower, drinking directly from the o.j. bottle in the fridge and not generally not having any lines of dialogue. Jughead does warn Betty about Chic -- like she wasn't already aware.

I should probably mention Andre the driver killed Cassady the convenience store clerk outside the Lodge Lodge in the woods, after he robbed Veronica and crew at axe point.

Our newest preview is Alice Cooper back and confronting Hal and Penelope. "Yeah, that's right, I said inbred," Cheryl and Toni getting caught by Penelope and oh look, it's Chic being creepy with Polly and the twins. Surprise.

And is Archie feeding Jughead info on Hiram Lodge? It’s a brand new Riverdale "There will be blood."