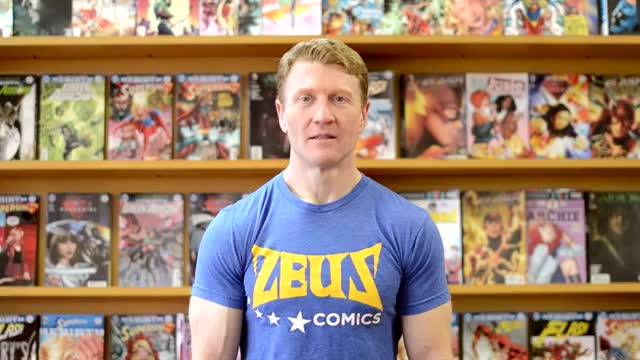 We're getting close to our Legends of Tomorrow season finale of and I, Ava answered a big question no one was asking... who is Ava Sharpe?

When Time Bureau Agent Gary timedoors onto the Waverrider looking for Director Sharpe, Sara and Ray follow Gary on a quest to find the missing Ava. After the discovery of a birthday card in the Director Sharpe’s trash, Sara follows the address to Fresno 2018 and Ava's parents. But all is not as it seems as Ava's parents are revealed to be actors. A further widening mystery leads Sara, Gary and Ray to steal the Mothership for a jaunt to Ava's first mission in 2213 Vancouver. It's here they quickly find Ava and another Ava and another Ava - because Ava is an Advanced Variant Automaton.

Tracking the stolen Mothership Director Sharpe - Ava finds Sara, Gary and Ray and comes face to face with  - well - herselveses and her origin. Reminding her of their very real romance, Sara rallies Ava to battle the army of clones intent on killing the intruders of the Advance Variant Automation plant.

So! Rip Hunter pulled a clone from 2213, installed her as a time agent and gave her false memories even going so far as to hire actors to play her parents. Question: How does this relate to Mallus and the totems? Is it a potential army to battle Mallus? Is it a potential Legion to fix time anachronisms? Or is it as simple as the creation of drama to prevent Sara and Ava's romance? Maybe a tease for something next season?

Our subplot in this episode is what moves the season long Mallus plot further when Nate and Wally travel to 2018 Detroit to check on injured and totem less modern day Vixen Mari McCabe. While we don't get Mari McCabe actor Megalyn Echikunwoke, we do get the live action debut of her adoptive father Chuck McCabe. It's here in Detroit, Nate and Wally come face to face with Kuasa who's there to protect Mari from the Darhks and Mallus. Despite being at odd with her grandmother Amaya, Kuasa has realized her goal is to save her village and her family something that won't happen if Mallus destroys the time line.

In a ruse to get the Anasi totem back from a Mallus-possessed Nora, Kuasa offers up Nate as bait to Damien and Nora. And Nora takes it! It was kinda a surprise that she just hands Kuasa the totem. Nora's like She's proven herself an ally and I'm powered by Mallus now - so here you go! What?!

It’s during a fake torture sesh with Nate, Damien reveals like Kuasa to her family he is newly opposed to Mallus because he realizes he'll lose his daughter to the time villain. I dunno, dude. Sudden change of heart after offering up young Nora to Mallus and an asylum? What? You got your own resurrection and released Grodd on the timeline and you're like, 'I'm out.'

During Nate's rescue, Nora takes down our Legends with only Kuasa ultimately standing in her way. It's in the moment we get a show of Mallus' power as he rips the water totem from Kuasa's heart - killing Kuasa.

Two episodes left and I scoured the credits to see if Kuasa returns. While she found her redemption in her grandmother’s eyes, I wasn't ready to let Kuasa go. I want a super-powered totem battle against Mallus but if Kuasa has truly died we lost out water totem from my fantasy

Despite the loss of Kuasa, it's a big victory for the Legends - Fire, Air, Spirit, Earth and Death are now in possession of the Legends. Mallus and the Darhks have only the water totem but Legends may have an ally in Damien.

Up next Mallus voice actor John Noble makes his very real, real debut playing himself! You guys might recognize him as the mad king from Lord of the Rings or Sleepy Hollow or Fringe! Our preview didn't give us any of John Noble but we did get a young Barack Obama. Can our Legends save Barack Obama from the fury of Gorilla Grodd?