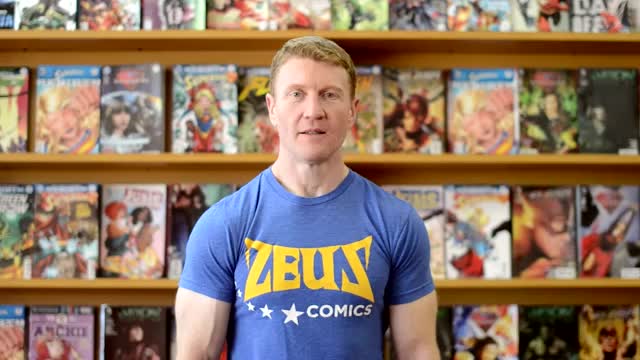 Hello my Supergirl Superfriends! It's Richard from Zeus Comics!

With an apocalyptic solar eclipse and our unholy worldkilling trinity of Reign, Purity and Pestilence united our Superfriends head into battle! Not going to lie - this episode was epic!

We kick off with Lena Luthor coming clean about her experiments on Samantha to see if she can cure her of Reign. The reveal is that Lena was keeping Reign contained via Kryptonite and a vault built by her villainous brother Lex.

Wait! Rewind! Lena had  Kryptonite?! This reveal will playout as trust issues between Supergirl, Lena and Jimmy Olsen over the course episode. Perhaps the biggest thing to glean from this is that Lena tells Jimmy she's figured out how to synthesize Kryptonite on her own.

Back at the Dark Fortress, Dark Mom gets our trinity to join hands to create a blessed darkness which will not only blot out the sun but rob Supergirl of her powers. One final piece remains though, all three worldkillers must destroy their human identities, something Pestilence does to her Dr. Grace persona surprisingly quickly - Bye.

This leaves Samantha and Julia trapped in a shadowy alternate dimension that Supergirl tells us is the Kryptonian Valley of Joo-Roo.

It's a place Supergirl briefly visits this episode in a dream - and an explanation that brings together visions both Supergirl and Samantha have had all season long.

Using the same tech Brainy used to access Supergirl's consciousness while in a coma from back at the start of season, Supergirl, Lena and Alex enter Joo-Roo to find Samantha and Julia.

Their hope? To get either Julia or Samantha to awaken to send a signal so our heroes can learn the location of the Dark Fortress.

And it works! The downside? Alex and Lena and Supergirl are now trapped in JooRoo with Reign!

Now briefly free Samantha sends the signal to the DEO while also ripping away the crystal that projects Dark Mom. This awakens pestilence from their witches eclipse-trance who punches Samantha to bring Reign out of the Dark Valley and just in time too as Reign was about to kill Lena

So "To the Legion Cruiser!" as the Martian Manhunther, Mon El, Saturn Girl and our awakened heroes lead an all out assault on the Dark Fortress. This battle was awesome with Supergirl versus Reign, Mon El and Saturn Girl versus Pestilence and Martian Manhunter and Alex versus Purity.

During the melee, Julia who had been struggling in JooRoo with the deaths of the people she killed as Purity is able to overcome, regaining control of Purity complete with powers!

In this moment Julia and Pestilence go after each other killing each other in the fight. But uh-oh Superfriends - their dark energy flows into Reign as the Dark Fortress collapse and our heroes flee.

The death of Pestilence also means the Legion’s mission to stop future Pestilence from becoming Blight is over. Something Imra tells Mon El.

Only one things stands in Reign's way and it's the last piece of humanity Samamtha has - her daughter Ruby. Can our Superfriends stop Reign who now as the combined powers of all three worldkillers?

Plus what secret does Samantha’s mom have on stopping Samantha? It's an all new Supergirl,  "Shelter from the Storm!"