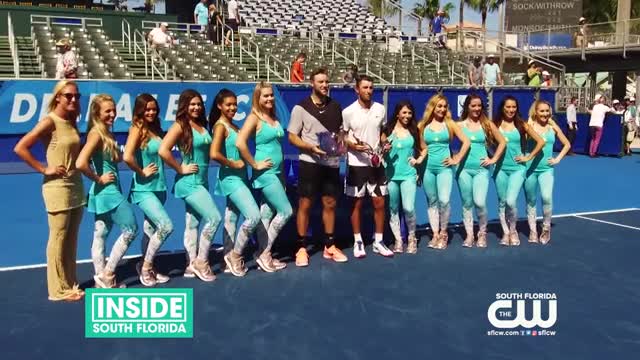 The Delray Beach Open runs from February 15th-24th at the Delray Beach Tennis Center. And the tournament’s director Mark Baron is excited for what looks to be another banner year.

"The event is in its 27th year, its been a growing, annual event that the Baron family is excited about doing each year." said Mark Baron, Tournament Director of the Delray Beach Open.

If you’re looking for big names, past and present, the tournament has them. First there's the Champions Tour on opening weekend.

"The Champions Tour starts on Friday the 15th and it goes through Sunday. It's Team World against Team America. On Team World we have Tommy Haas and Wayne Ferreira and on Team America we have Gonzales, Levine, and Gamble, three great players, in fact a couple of them won the ATP World Tour." Said Baron.

And then it's the current pros on the ATP tour.

"We have a phenomenal field, of the top ten players, I think we have four and five in the world. The one that everyone is dying to see is Juan Martin Del Potro, it's his fifth time out of the last six years playing in the event." said Baron

Watching world-class tennis works up an appetite, so you're gonna need to eat and drink. At the Open you won't go hungry or thirsty, especially at the Game, Set, Pour event.

"Game, Set, Pour is a new event we are doing this year, it's all the beer you can drink within reason and all the food you can eat. It's all local restaurants and local craft brewers, and if it goes well, which it looks like it is because it's almost sold out, it will become an annual event." Said Baron.

Of course, hard-core tennis fans will come out in droves, but even if you're not a tennis lifer, it's still a great experience.

"We have bands, singers, and songwriters between all of the matches. We even have artists coming out and literally painting on site and the art is phenomenal. The thing about the Delray Beach Open is that it's a family-friendly event and you are gonna be right next to the players." Said Baron.

For more info about and tickets to the Delray Beach Open, go to yellowtennisball.com