Give A Child A Book

Earlier this week we were at IBK Preschool is Broward County where students received dozens of free books through our “If You Give a Child a Book” Campaign. On Thursday, we went to a Head Start Center in Miami-Dade, where thousands of books were distributed to children in need.

Studies show the ability to read can help lift children out of poverty. South Dade Child Care Center in Homestead is one of the many schools receiving free books to help low-income students meet their educational goals. Researches and educators agree that making sure kids have access to books is more important now than ever.

“It means the world to these children and it makes such a big difference for them not just academically but their social development,” said Miami-Dade County Chief Community Services Officer Morris Copeland.

Morris recommends parents to read to their kids at least 20 minutes a day.

“Particularly from challenged communities, their vocabulary is almost 5,000 words less than someone that’s from a fluent community of family. So they need to constantly read to their children, have their children read to them, encourage them with positive incentives to read so it can be enjoyable,” said Copeland.

Over 300 students received a bag of books Thursday and parent’s were grateful.

“It’s important because the kids are the future and they need to be taught things now at an early age, while they’re still young,” said Tequila Dye, mother of three.

“She learns a lot, her vocabulary expanded and reading is the way to success,” said Sofia Hernandez, mother of one.

All the money raised from WSFL-TV and the Scripps Howard Foundation’s “If You Give a Child a Book” Campaign, went straight to schools in need in both Miami-Dade and Broward County. 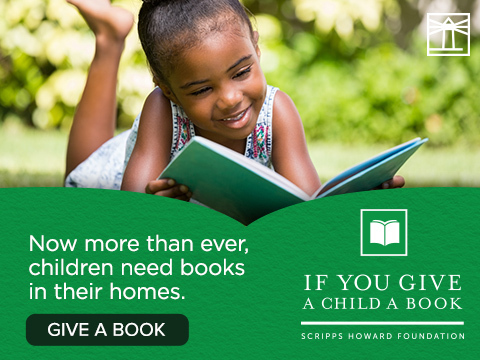 Now more than ever, children need books in their homes.