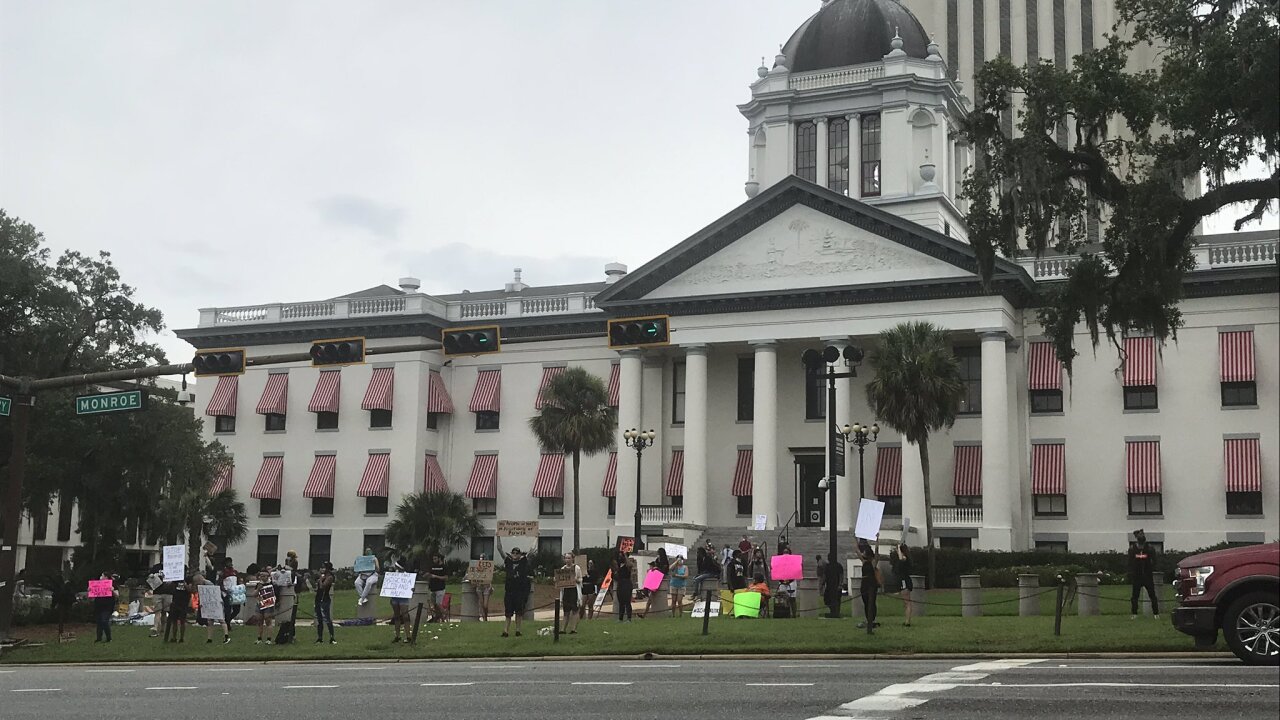 Protesters stand in front of the Capitol Building.

TALLAHASSEE, Fla. (WTXL) — In response to the violent mobs in Washington, D.C. on Jan. 6, 2021, the Florida House of Representatives and Senate filed identical bills to combat violence, disorder, and looting in Florida.

Governor Ron DeSantis
“While as Americans we all have a right to peacefully assemble, violence or rioting of any kind is not acceptable and will not be tolerated in the state of Florida. In 2020, I proposed legislation to stop violent assemblies, combat rioting and protect law enforcement. In light of today’s events at our United States Capitol, we have no time to waste to uphold public safety. I look forward to working with House Speaker Sprowls and Senate President Simpson to swiftly pass this bill during the upcoming Legislative Session so that we may protect the rule of law in our great state.”

House Speaker Chris Sprowls (R-Palm Harbor)
“In a democracy, rioting, violence and lawlessness are repugnant and unacceptable. This isn’t a peaceful protest. It’s an act of domestic terrorism. It’s a tragic, cowardly and un-American spectacle. Together we are taking immediate action in Florida by filing the Combating Violence, Disorder and Looting and Law Enforcement Protection Act. The House will work together with Governor DeSantis and the Senate to protect Floridians from this kind of nonsensical violence. And when these types of despicable acts happen, law enforcement and prosecutors will have the tools and the support they need to keep Floridians safe, communities whole and property undamaged.”

Senate President Wilton Simpson (R-Trilby)
“Our constitutional right to protest has played a critical role in the great history of our democracy. I fully respect the right of every American to peacefully protest; however, there is absolutely no excuse for attacking law enforcement and destroying property. Over the last few months, Governor DeSantis has discussed strengthening our state laws to increase penalties for bad actors who turn otherwise peaceful and constitutional protests into violent attacks on law enforcement officers. I am proud to support our Governor and join with our House colleagues to make it clear that peaceful protests are welcome, but violent, destructive mobs will not be tolerated in Florida.”

State Representative Juan Fernandez-Barquin (R-Miami-Dade)
“What I witnessed today in Washington was disgusting, and I repudiate the violence and destruction that took place there. Today I filed legislation in the Florida House to make sure it doesn’t happen here in Florida. It is never acceptable for a civil society to behave in this way, and this bill will ensure that it is unwelcome in Florida. It does not matter if you are Republican or Democrat, we are a society of laws, and all must follow the law.”

State Senator Danny Burgess (R-Zephyrhills)
“We are a nation of law and order, not violence, destruction and unrest. We respect the right to peacefully protest, but the shameful conduct we witnessed at the United States Capitol today and episodes of violent civil unrest that we have witnessed over the last several months have no place in our democracy. This legislation makes it clear that here in Florida criminals who seek to thwart peaceful protests by willfully inciting violence, attacking law enforcement and destroying public or private property will be held accountable.”

The bill, originally filed in September, was introduced by Gov. Ron DeSantis to increase penalties to a third-degree felony for those who participate in "disorderly assemblies," block roads, and damage monuments.