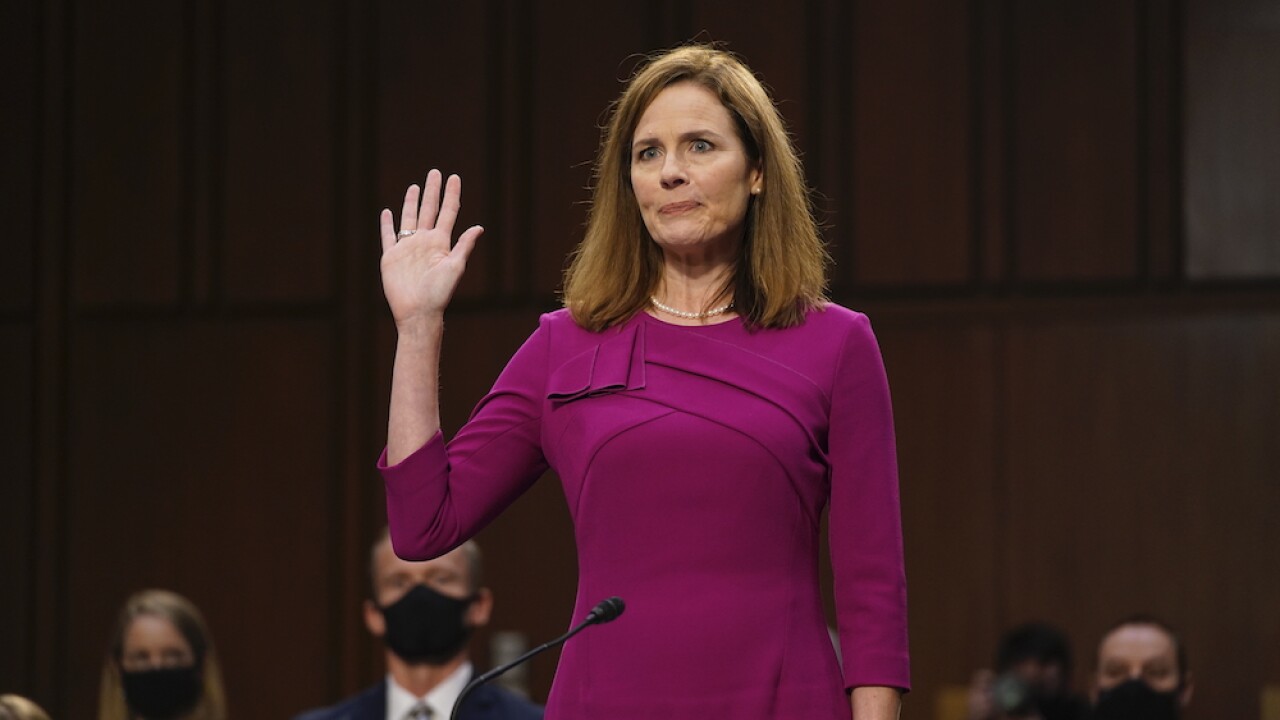 If Monday's opening statements were any indication, Judge Amy Coney Barrett's nomination to the Supreme Court will face a bitter partisan fight in the days and weeks ahead.

Given the timing — less than a month ahead of the 2020 general election — and the implications of appointing a sixth Supreme Court justice nominated by a Republican president, Democrats painted a bleak picture of America should Barrett be nominated to serve on the Supreme Court.

Barrett's confirmation process was already set to be fraught with political controversy, given that Republicans successfully blocked President Barack Obama's nomination of Judge Merrick Garland for over half a year ahead of the 2016 presidential election, claiming that voters should have a say in the confirmation process

In fact, Ranking Member Dianne Feinstein, D-CA, used her opening statement to share a 2016 quote from Senate Judiciary Committee Chairman Lindsey Graham, in which he said he would wait to fill a Supreme Court seat if it came open between the opening of the primary process and the 2020 election.

Feinstein also added that Democrats intended to focus on the "consequence" of "rushing" a Supreme Court nominee through the Senate.

Senators will question Barrett beginning at 9 a.m. ET Tuesday, a process that will last into Wednesday. Graham says he hopes to have the confirmation hearing process wrapped up by Thursday.

Several Democrats noted that in the past, President Donald Trump has only promised to nominate justices who will undo the Affordable Care Act — the law that enacted public health care and offered more consumer protections. They also pointed to Barrett's past criticism of Supreme Court decisions that have upheld parts of the law.

Other Democrats, like Sen. Cory Booker, argued that Barrett's nomination was a ploy by Republicans to undo public healthcare initiatives and protections afforded by the Affordable Care Act, saying that a Barrett nomination would look like "deciding between buying medicine and buying groceries."

Sen. Kamala Harris — the current Democratic vice presidential nominee — echoed those statements, claiming that President Donald Trump was attempting to "bypass the will of the American people" so they can strike down the Affordable Care Act.

Sen. Mazie Hirono, herself a cancer survivor, wondered aloud if she would have survived had she been in a position that many Americans may find themselves in without government-backed healthcare.

Graham has said that he expects Barrett to be confirmed to the Supreme Court a week before the Nov. 3 election. On Nov. 10, the Supreme Court is scheduled to hear a key case to determine the legality of portions of the ACA.

Several Democrats called out their Republican colleagues for even holding hearings amid a pandemic. Appearing virtually, Harris claimed it was "reckless" for the Judiciary Committee to hold in-person hearings and called out Graham for not requiring Senators to test negative for the virus before appearing in the room.

At least two of the senators on the committee — Sen. Mike Lee, R-Utah, and Sen. Thom Tillis, R-North Carolina — have recently tested positive for the virus. Both at Barrett's nomination ceremony at the White House in late September — an event that has been described as a "superspreader" after about a dozen people in attendance, including President Donald Trump, tested positive for COVID-19.

Lee, having been cleared by a Congressional physician, appeared in person. Tillis appeared on video teleconference.

Graham said Monday that the hearing room had been deemed by the Capitol architect to be in compliance with CDC social distancing guidelines.

Other Democrats said their time would be better spent working on passing more COVID-19 stimulus — something Trump has been willing to entertain in recent days.

Republicans defend Barrett's character, call out those questioning her faith

Republicans defended Barrett's character by accusing Democrats of attacking her Catholic faith, often pointing to constitutional statues against "religious tests" as a qualifier for public office. Sen Josh Hawley, R-Missouri, specifically accused Harris of "anti-Catholic bigotry" by questioning past judiciary appointments fitness for office due to their membership in the Knights of Columbus, a Catholic organization.

Sen. Joni Ernst, R-IA, further defended Barrett's character against those who she says had labeled her a "handmaid," saying that such accusations were "demeaning to women."

"We don't have to fit a narrow definition of womanhood," Ernst said.

At this point, Republican Senators have the votes to confirm Barrett. Graham has said he expects the process to be finished in the next two weeks — about seven days ahead of election day.

In her opening statement, which was obtained and published by several media outlets, Barrett paid tribute to the late Justice Antonin Scalia — a conservative icon for whom Barrett worked for as a clerk early in her career. She said she shared in Scalia's philosophy of "textualism" — apply the law directly as it is written.

"A judge must apply the law as written, not as the judge wishes it were," Barrett said.

Her opening statement also offered condolences to the justice whose seat she hopes to fill, Justice Ruth Bader Ginsburg.

"I have been nominated to fill Justice Ginsburg's seat, but no one will ever take her place," Barrett will say. "I will be forever grateful for the path she marked and the life she led."