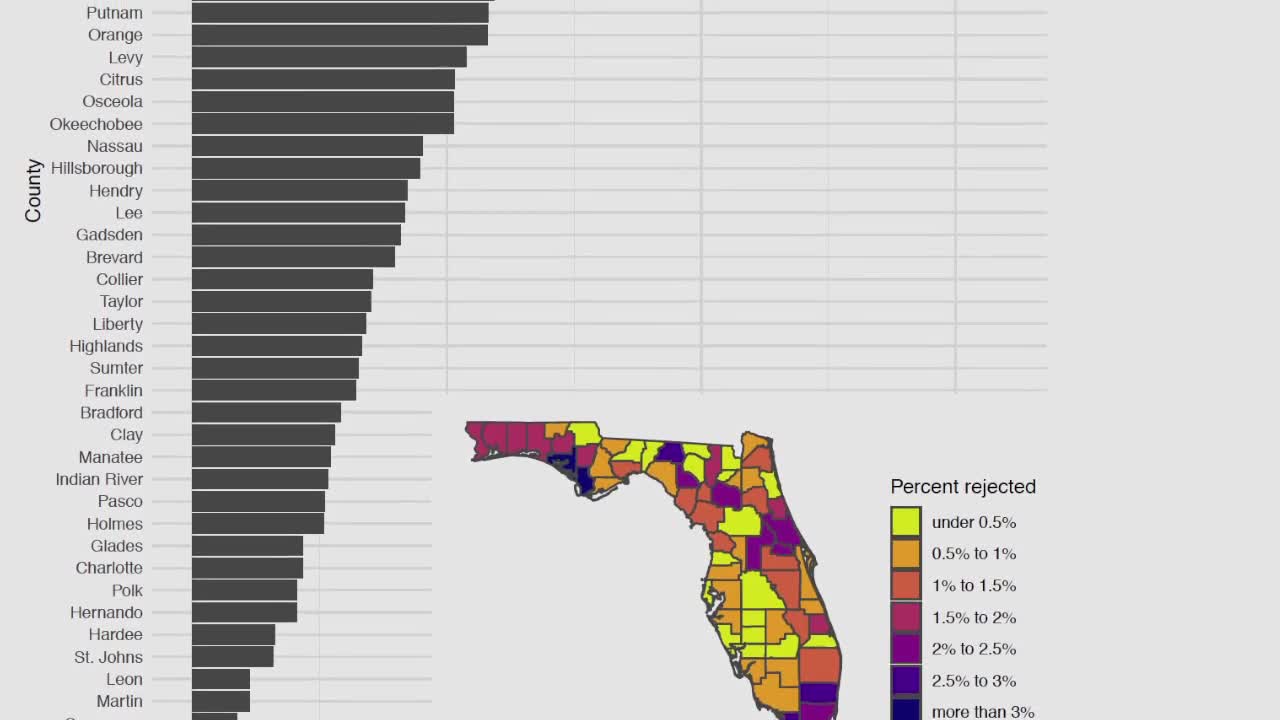 SARASOTA, Fla. -- Experts predict Florida’s vote-by-mail numbers could increase by 50 percent in the upcoming presidential election because of COVID-19.

Before the pandemic, state lawmakers passed reforms intended to improve the vote-by-mail process. But some worry that their vote won’t be counted or could get tossed out.

The ABC Action News I-Team has uncovered issues with training and troubling early numbers, which raises questions about how the process is working.

In November 2000, election night in Florida stretched past Thanksgiving Day, as elections officials tried to interpret dimples and hanging chads on butterfly ballots.

Twenty years later, experts warn the outcome of another close election could depend on how well the signature on your mail-in ballot envelope matches the one on file at the elections office.

“I got a call from the elections supervisor’s office and they told me that there was some sort of mix up with my ballot. The signature didn’t match the one they had on file,” Wilcosky said.

Wilcosky scrambled to get a copy of his driver’s license and what’s called a vote-by-mail cure affidavit to the elections office by election day.

“So I kind of created a little bit of a stressful situation right before… I was like, is my vote gonna count? Is it not gonna count?” said Wilcosky.

Other Florida voters whose signature was rejected told the i-team they found out too late or didn’t make the effort to get their ballot corrected.

Dr. Daniel smith conducted research for the University of Florida in which he uncovered 1.2 percent of vote-by-mail ballots, about 32,000 votes, were rejected in Florida’s 2018 election.

“You’re not there. So we entrust that the signature on the back of your envelope as a registered voter is going to match what’s on the records of the supervisor of elections,” said Smith.

Smith found rejection rates varied widely across Florida counties, from a quarter of one percent in some counties to three percent in others.

Ballots of younger, older, and minority voters more likely to be rejected.

“We are a single state, we have single state laws. And yet there’s incredible variation across all different types of demographic groups that raise concerns,” Smith said.

In 2018, the winning margin for Rick Scott over Bill Nelson in the U.S. Senate race was just over 10,000 votes, out of the 8 million ballots cast.

The Florida Democratic Party filed a lawsuit to extend the recount, claiming “Florida’s rejection of vote-by-mail ballots is based on error-prone signature-matching determinations.”

Last year, state lawmakers passed reforms to the process, allowing voters whose ballots are rejected to provide additional information to “cure” their ballots.

“We will send a letter, we will email if we have an email address. We will call them if we have a telephone number and or text message,” said Sarasota Supervisor of Elections Ron Turner.

Turner said many ballots with issues in his county were corrected before the deadline in the recent primaries.

But in neighboring Manatee County. a thousand ballots were rejected.

In Sarasota County, computers determine whether most signatures match.

“We’re going to take that vote-by-mail signature on an envelope and we’re going to compare it to what the voter has in their records,” said Turner.

That signature in the voter record may have come from the DMV, one of the most common places to register to vote.

“You’re using a little stylus and you’re trying to get your signature in. if I look at my driver’s license signature, it doesn’t look anything like my signature,” said Smith.

If a computer can’t make a good match, then it goes to a human set of eyes. The county canvassing board must ultimately decide to reject a ballot.

Forensic document examiner Cina Wong says county elections officials may not know what to look for.

“You have people in the elections office that are doing a job, comparing signatures which they are not qualified to do and that is of great concern,” said forensic document examiner Cina Wong.

Wong testified about the ransom note in a civil trial connected to the JonBenet Ramsey murder and also testified in a 2018 Virginian election fraud case in which Congressional candidate Shaun Brown was removed from the ballot after Wong found hundreds of forged signatures on the petition used to qualify brown for the office.

Wong says our signatures change over time and can be affected by age, illness, injury, medication, mood or even the type of pen you use.

She says it takes experts years to know how to tell if a signature is real or a forgery.

“I pull out an old college paper, I can hardly recognize my own handwriting,” Vastrick said.

Vastrick, who has more than 40 years of experience as a forensic document examiner, was hired by the state in 2019 to train elections supervisors in how to verify signatures.

That training was not previously required until the election law was updated.

“What I am going to teach you is a way to view handwriting differently than you have in the past,” Vastrick said during his presentation last October to elections supervisors.

The initial training lasted one hour, 47 minutes and took place at a conference in Orlando attended by about 200 elections officials.

When asked what level of expertise those county officials would have after receiving the training.

“Compared to a forensic document examiner they don’t. But for an average layperson, it’s fairly significant,” Vastrick said.

Ron Turner was among the elections officials Vastrick trained.

“We have to be able to prove beyond a reasonable doubt that this isn’t the voter’s signature. So the law errs on the side of the voter,” Turner said.

But Wong fears there could still be too many questionable signatures coming in too late to all be cured.

“It’s very important to our process of having every vote count and it is serious and it should be taken seriously. And the work shouldn’t be done by people without proper training,” said Wong.

Elections officials say if you plan to vote by mail and it’s been a while since you registered to vote, you should update your signature at the elections office.

You should also make sure to sign your ballot envelope and include you email and phone number, so if there is a problem with your signature, they’ll be able to quickly contact you.

If you have a story you’d like the I-Team to investigate, email us at adam@abcactionnews.com