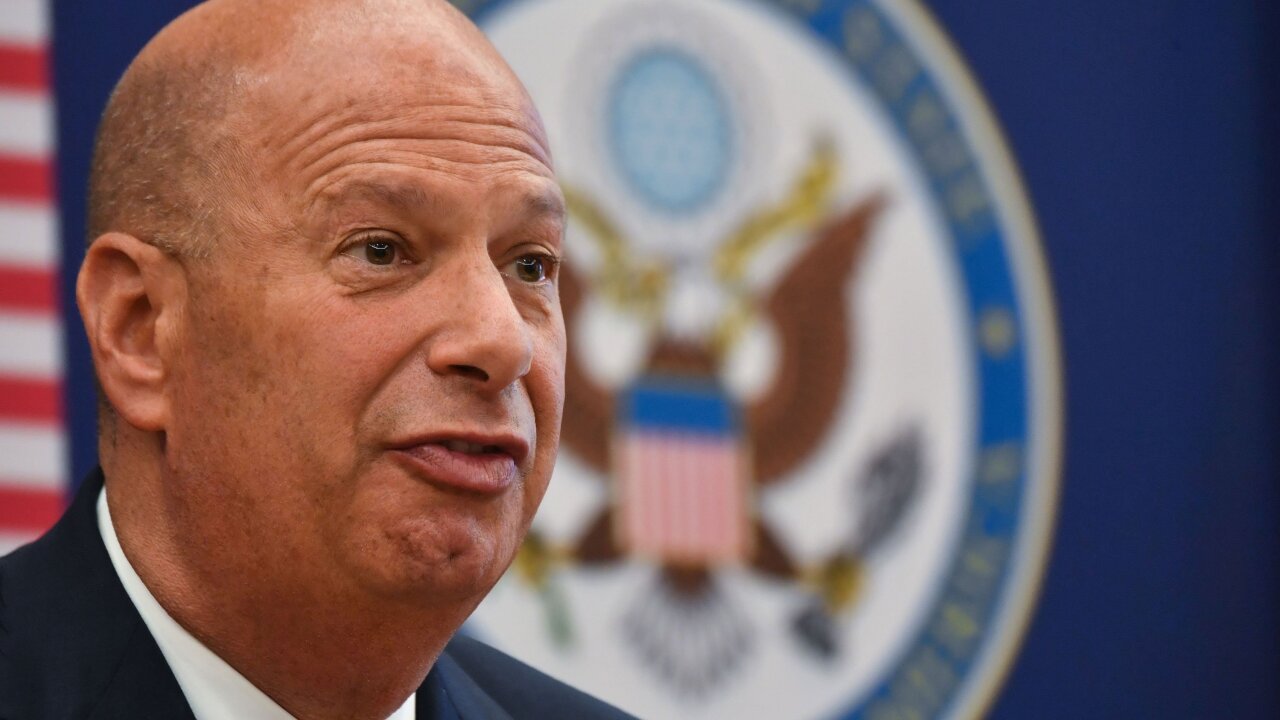 WASHINGTON – US Ambassador to the European Union Gordon Sondland was directed by President Donald Trump to work with Rudy Giuliani on Ukraine, he told Congress on Thursday, and was left with a choice: Abandon efforts to bolster a key strategic alliance or work to satisfy the demands of the President's personal lawyer.

Sondland said he wasn't aware until "much later" that Giuliani's agenda might have included an effort to "prompt the Ukrainians" to investigate former Vice President Joe Biden and his son Hunter and to involve the Ukrainians in the President's campaign, according to his opening statement, which was obtained by CNN in advance of the deposition.

Sondland's revealing testimony is a clear break with Trump over Giuliani — he said he was "disappointed" that Trump wouldn't commit to a meeting sought by Ukrainian President Volodymyr Zelensky until they spoke with Giuliani, who was pursuing an investigation into Biden, a potential political rival in Trump's reelection campaign. And the ambassador's testimony showcases how Trump put on hold an effort to strengthen relations with Ukraine until top US officials were in contact with his personal attorney.

"Based on the President's direction, we were faced with a choice: We could abandon the goal of a White House meeting for President Zelensky, which we all believed was crucial to strengthening U.S.-Ukrainian ties and furthering long-held U.S. foreign policy goals in the region; or we could do as President Trump directed and talk to Mr. Giuliani to address the President's concerns," Sondland said in his opening statement.

"We chose the latter path, which seemed to all of us -- Secretary (Rick) Perry, Ambassador (Kurt) Volker, and myself -- to be the better alternative," Sondland continued. "But I did not understand, until much later, that Mr. Giuliani's agenda might have also included an effort to prompt the Ukrainians to investigate Vice President Biden or his son or to involve Ukrainians, directly or indirectly, in the President's 2020 reelection campaign."

Sondland's testimony Thursday comes as he's under fire for his role in the July 25 call between Trump and Zelensky, in which Trump repeatedly urged Zelensky to open an investigation into the Bidens. Sondland's testimony is likely to ratchet up the Democrats' focus on the concerns top officials expressed about Giuliani's involvement in Ukraine — and how they disagreed with Trump's insistence on using his private attorney to negotiate diplomatic efforts.

Sondland's text messages with the top US diplomat in Ukraine, Bill Taylor, are a key data point for the impeachment investigation, in which Sondland told Taylor there was "no quid pro quo" after speaking to Trump about the matter.

Sondland's testimony says that he knew of no arrangement tying US security assistance to Ukraine with an investigation into the Bidens — but also that it would be wrong to do so.

"Let me state clearly: Inviting a foreign government to undertake investigations for the purpose of influencing an upcoming U.S. election would be wrong," Sondland said, according to the statement. "Withholding foreign aid in order to pressure a foreign government to take such steps would be wrong. I did not and would not ever participate in such undertakings. In my opinion, security aid to Ukraine was in our vital national interest and should not have been delayed for any reason."

Sondland distances himself from Giuilani

Sondland said that he only spoke with Giuliani briefly this year, and that he was unaware that Trump raised investigating Biden with Zelensky on the July 25 call until the transcript was released last month.

"I was not on that July 25, 2019 call and I did not see a transcript of that call until September 25, 2019, when the White House publicly released it," Sondland said. "None of the brief and general call summaries I received contained any mention of Burisma or former Vice President Biden, nor even suggested that President Trump had made any kind of request of President Zelensky."

Giuliani, however, was publicly discussing in the media his efforts to investigate the Bidens and Ukraine this spring, which included a campaign to remove then-US Ambassador to Ukraine Marie Yovanovitch , whom Giuliani accused of criticizing the President. There has been no evidence of wrongdoing by either Joe or Hunter Biden in Ukraine.

House Democrats questioned Sondland's contention that he was unaware of Giuilani's true motives.

"I think he's basically trying to defend his reputation and his own behavior. Some of the testimony that he provided was not credible to me with respect to his sort of not understanding all the things that were happening around him and in full view of the American people," said Rep. David Cicilline, a Rhode Island Democrat.

Former White House Russia adviser Fiona Hill testified earlier this week that after Sondland had raised investigations in a July 10 meeting, concerning Hill and then-national security adviser John Bolton, and Hill then overheard Sondland discussing with Ukrainians Burisma, according to a source familiar with the testimony. Bolton urged Hill to report the incident to National Security Council lawyer John Eisenberg, according to a source.

But Sondland disputed Hill's testimony that significant concerns were raised, saying there was little disagreement in the meeting, according to another source familiar with the testimony. Sondland also said he said he spoke recently with Energy Secretary Rick Perry , who was also in the meeting and confirmed his recollection of events, that source said.

Ambassador is a key figure from Ukraine texts

Sondland, a major Trump donor and former hotel chain owner, has been at the heart of the Democratic impeachment inquiry led by the House Intelligence, Foreign Affairs and Oversight Committees because of his appearance on text messages provided to Congress between US diplomats, a top Ukrainian political aide and Giuliani.

In the texts between Sondland and Volker, which Volker provided to Congress , a potential meeting between Zelensky and Trump was linked to Ukraine opening an investigation ahead of the Trump-Zelensky call, and afterward with Zelensky announcing the investigation publicly.

Sondland tells Volker that Trump wanted a "deliverable" before a meeting would be scheduled, which he says in his testimony was a reference to "the efforts of Ambassador Volker to encourage the Ukrainian government to adopt a public statement setting out its reform priorities."

But he also plans to testified that Giuliani told the diplomats that the statement needed the two investigations "of importance for the President."

Several weeks later, Taylor raises concerns that a hold on US aid to Ukraine is tied to an investigation. "As I said on the phone, I think it's crazy to withhold security assistance for help with a political campaign," Taylor writes to Sondland on September 9, prompting Sondland to respond that Taylor was incorrect and that "the President has been crystal clear no quid pro quo's of any kind."

Saying he was concerned the Ukrainians could perceive a connection, Sondland told lawmakers that he responded to Taylor after he called the President directly to ask about the Ukraine aid.

Sondland told House investigators Thursday that his text message was only based on his conversation with Trump, according to a source with knowledge of his testimony.

In his prepared statement, Sondland aligned himself with career diplomats and passes responsibility for his role in the situation to political players, including Trump and Secretary of State Mike Pompeo.

Sondland also said that Pompeo, another potentially key player in the Ukraine effort who is so far refusing to turn over documents to the Hill, was aware of all his efforts on Ukraine policy and set him to work on the country from his first day on the job. Ukraine wouldn't naturally be the responsibility of the US's European Union expert, since it's not a member nation, Sondland's critics have said. Sondland countered Thursday that conflicts in Ukraine especially over its Crimean Peninsula are major security crises for Europe and the US.

"I understand that all my actions involving Ukraine had the blessing of Secretary Pompeo as my work was consistent with long-standing U.S. foreign policy objectives. Indeed, very recently, Secretary Pompeo sent me a congratulatory note that I was doing great work, and he encouraged me to keep banging away," Sondland said, according to his prepared statement.

Sondland also told lawmakers he was unaware of any concern among top National Security Council officials regarding his efforts and in the planning of the July 25 call — contrary to what Trump's former adviser Fiona Hill told the House committees earlier this week when she testified then-National Security Adviser John Bolton said the operation carried out by Sondland and acting Chief of Staff Mick Mulvaney was like a "drug deal."

"But if Ambassador Bolton, Dr. Hill, or others harbored any misgivings about the propriety of what we were doing, they never shared those misgivings with me, then or later," he said.

Notably, Sondland expressed his support for Yovanovitch, the Ukrainian ambassador who was attacked by Giuliani and fired by Trump — and whose ouster has been a sore point for the career State Department officials who have testified in the impeachment inquiry thus far.

"I found her to be an excellent diplomat," Sondland said, adding: "I was never a part of any campaign to disparage or dislodge her, and I regretted her departure."

The documents relevant to Sondland's testimony, according to a source familiar with the matter, include Sondland's communications with Hill and the National Security Council, emails and briefing materials assigning him to Ukraine issues at the start of his ambassadorship, Volker's introduction of Giuliani and Sondland and a July email between Volker, Taylor and Sondland agreeing Zelensky should stay out of the 2020 US presidential campaign.